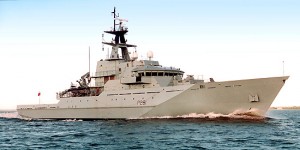 BAE Systems has submitted a detailed proposal to the Brazilian Navy to supply a package of naval vessels to meet its ambitious fleet renewal programme through a full technology transfer agreement, with the ships to be built in Brazil.

The proposal comes on the back of the recent Defence Cooperation Agreement between the UK and Brazilian Governments and marks the latest step in a move towards greater bilateral trade between the two countries. Based on BAE Systems’ proven ship designs, it includes the provision of five ocean patrol vessels, one logistics support vessel and five escort vessels as well as a comprehensive logistics support service. Importantly, the proposal also sets out arrangements for the UK Government endorsed opportunity of Brazilian partnership in the design and development of the new highly flexible, multi-role Global Combat Ship.

Alan Johnston, Managing Director of BAE Systems’ Surface Ships division, said: “We believe that this strategic partnership approach, combined with our proven ship designs, will bring strength to Brazilian industry and give the Brazilian Navy confidence in our ability to deliver an effective, affordable solution to meet its future naval capability requirements.”

BAE Systems has a long track record of working with the Brazilian Navy and its involvement can be traced back to Brazil’s Niteroi Class frigates supplied by the Company’s legacy business VT Shipbuilding in the 1970s. The latest proposal builds on this legacy and is designed to meet the objectives set out in Brazil’s National Strategy of Defence to enhance its indigenous industrial capability by enabling the country to develop an independent, sustainable naval shipbuilding and through-life maritime support capability.

“We are in discussions regarding the naval proposal with a number of potential industry partners in Brazil, including shipyards and combat systems developers,” added Johnston. “We are actively working to formalise these agreements and will provide further details in due course.”

The BAE Systems 90 metre Ocean Patrol Vessel included in the proposal is based on the proven River Class vessels in use with the UK Royal Navy. It uses the same core platform as the vessel being built by Bangkok Dock in Thailand under a similar technology transfer agreement, with systems and equipment tailored to the Brazilian Navy’s requirements. In addition, the Company has proposed a variant of the UK Royal Navy Wave Class fleet tanker, tailored to meet the specific aviation, stores and personnel requirements of the Brazilian Navy.

The new generation Global Combat Ship is being developed to be affordable and easily adaptable to the fast changing demands of modern defence. Entering into the Global Combat Ship partnership will enable the UK and Brazil to bring these highly capable ships into service, whilst bringing down costs through a rationalised design, build and procurement process and shared maintenance and support operations. It also provides Brazil with the opportunity to influence the design and access to UK Royal Navy standard training for its naval personnel.