U.S. Customs and Border Protection’s Office of Air and Marine has played a crucial role in responding to the severe flooding of the Red River in the upper Midwest. 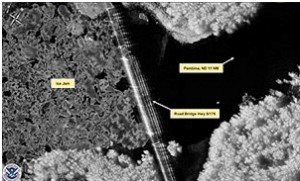 CBP unmanned aerial systems began providing imagery around the Red River Valley area to the National Weather Service beginning March 25. The aircraft, flown from the National Air Security Operations Center-Grand Forks, have flown over 40 flight hours using their UAS to provide critical information to the NWS flood forecast and emergency management crews. These flights are flown in conjunction with normal operations, and do not take away from critical security missions.

The remotely piloted Predator B UAS has already mapped over 800 nautical miles along the flooded tributaries and basins in Minnesota and North Dakota. The UAS provides streaming video and Synthetic Aperture Radar mapping, and change analysis of areas affected by the flood, such as levee integrity and ice damming. The real-time video stream provides situational awareness to federal, state and local agencies working at the North Dakota and Minnesota emergency operations centers, as well as the North Dakota Army National Guard.

“The images we provide give forecasters a more accurate predictor of when and where the flooding will be at its worst,” said John Priddy, director of air operations at NASOC-GF. “Last year we flew more than 55 hours mapping the flooded areas, and with the Big Pipe video system constantly streaming imagery, it allows for the decision makers to study areas of concern in detail.”

Big Pipe is a video distribution system that CBP offers to federal, state and local law enforcement agencies providing real-time video and still imagery that increases situational awareness. The images can be viewed anywhere there is an internet connection-including smartphones- allowing for critical asset placement to be informed and timely.

The CBP UAS program expanded to the Northern Border in early December 2008 and provides reconnaissance, surveillance, tracking and acquisition capabilities in areas that are difficult to access or otherwise considered too high-risk for manned aircraft or CBP personnel on the ground. In Fiscal Year 2010, the UAS flew over 500 hours in support of law enforcement and emergency responders.