Dozens of passengers have found fame on a snowy Russian airfield, pushing the wings of a Tupolev-134 airliner to set it rolling – video here 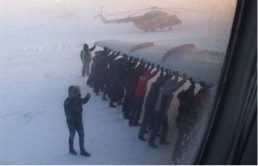 KRASNOYARSK, November 25. /TASS/. Dozens of airline passengers in the northern Russian city of Igarka have shown a remarkable sense of humour and readiness to lend a hand by helping the local airport’s tug-truck roll their ice-bound plane onto the Siberian runway.

The video here shows dozens of passengers pushing the wings of a Tupolev-134 airliner to set it rolling after the landing gear’s braking system seized up after the 24 hours the plane had been on the ground on a snowy Krasnoyarsk Territory airfield.

“In air temperatures as low as 52 degrees below zero Celsius its braking system got jammed,” Gorbunova said. “The tug-truck failed to get the plane moving so friendly passengers agreed to help and they soon safely left for home.”

Transport prosecutors are now probing the incident, notably into whether the plane had undergone proper maintenance. Inquiries also center on actions of the airport services, the air carrier and the crew.

As for the passengers, many of them found amusement in the incident. One of them is heard on the video noting the several things that make a real man’s life worth living: Writing a book, planting a tree, or at least bracing one’s muscles to help an immobilised passenger plane take to the skies.