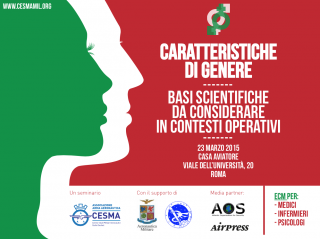 The phrase “Behind every great man is a great woman”, written the first time just after the II WW, it is absolutely no longer applicable today and for sure can be inverted.

This is one of the messages of the seminar “Manage Gender Diversity” organized by CESMA, (Aeronautical Military Studies Centre “Giulio Douhet”) in Rome with the objective to analyse, supported by scientific bases, the Man / Woman differences in operational military contexts.

Science has shown that men and women use different neural circuits, elaborate the information, especially the visual-spatial, in a different way, take decisions differently. Indeed and especially for those working in operational situations, these differences can assume a great critical value, drawing possible advantage in areas like training or considering effectiveness of operations.

In the presence of about 150 experts from the Armed Forces, universities and industries, lecturers examined responsiveness to particular physical stress, differences in moral behavior and impact of the decision-making processes, focusing in particular on the orientation ability in extreme environmental conditions, the need for training, decision-making skills under stress or after traumatic events.

Very interesting also the differences in salary and responsibility levels achieved by women in different countries in different geographic areas, and, finally, a study of the behavior and gender differences at high altitude.

Some of the described experiments confirmed the perception that the female gender has a greater attention to detail, the verbalization, the colors: and, something that would not have imagined, greater effectiveness and efficiency of sleep.

“We are still early for a good use of gender differences in operational situations, but if, as has been said, women started to vote 70 years ago, we are still at the beginning of the process and the future bodes well” – said January Nazzareno Cardinali, director of CESMA, in the conclusion of the seminar.

The conference proceedings will be published in full on the site www.cesmamil.org