The Three Cybersecurity Trends That We Will Face in 2017 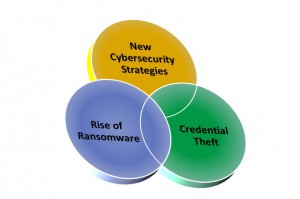 Cyber criminals are continually looking for more effective ways to infiltrate and compromise networks. This year we have witnessed some of the worst cyber-attacks affecting critical infrastructure and personal data. What’s next for the cybersecurity sector? We present you the three most relevant cybersecurity trends that we will face next year.

Credential theft has consolidated in 2016 as one of the biggest cyber threats, and is likely to continue to grow in 2017. Insider incidents involving credential theft cost companies $4.3 Million per year on average, according to Ponemom’s 2016 cost of insider threats report.

Traditional detection methods tend to focus on identifying malware. However, an attacker doesn’t need to use malicious code to breach a company’s defenses anymore. They can gain control of a victim’s network and steal confidential data without it. Attackers are increasingly trying to steal credentials from employees in order to pull off financially or espionage motivated crimes.

The rise of ransomware

Although ransomware is not a new type of attack, it has been one of the most spread threats in 2016. According to a June 2016 survey from Osterman Research, almost one out of every two participants indicated their organization had suffered an at least one ransomware attack in the past 12 months.

This technique, where hackers gain control of your data, encrypt it and demand payment to hand over the key, has now become the most profitable malware type in history. Estimates from the FBI point out that ransomware costed companies $1 billion this year. We can expect this cyber threats to increase and become more sophisticated in 2017.

Legislative change is a catalyst for re-thinking cybersecurity strategies and implementing state-of-the-art cybersecurity capabilities. New legislation came into force this 2016, and this will raise the bar for businesses in terms of protecting citizens’ data.

The European Parliament adopted in 2016 its first cybersecurity regulation, the Directive on security of network and information systems (NIS Directive). Member states will start implementing this directive into their national laws in 2017, forcing a shift in the cybersecurity strategies of organizations throughout Europe.