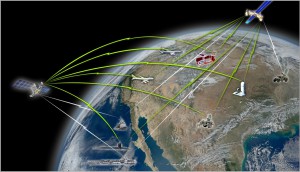 Advanced satellite communications are an absolute necessity for military victory. The information that gets sent around the world must be kept safe, secure and protected. It can’t be intercepted by adversaries. Thousands of miles in space, the Advanced Extremely High Frequency (AEHF) satellites provide U.S. armed forces with greater bandwidth to reliably and securely transmit critical data. On the ground, the satellite dishes and terminal systems combine to form a communications network that dramatically reduces the chances for jamming or interception.

On top of the three terminals already in portfolio (in 2014 Raytheon has been awarded a $298M contract for the Family of Advanced Beyond Line of Sight Terminals (FAB-T) Command Post Terminals (CPT) Production program), Raytheon has recently added two significant Air Force programs. One is called the Global Aircrew Strategic Network Terminal (Global ASNT), which sends and receives messages that alert the bomber and tanker crews to spring into action in an emergency. The other is called the Family of Advanced Beyond Line of Sight Terminal (FAB-T), a secure, airborne communications network that allows the president of the United States to communicate with senior military leaders. All told, Raytheon’s five protected terminal systems are the most of any company in the aerospace and defense industry.

Managed by the Space and Missile Systems Center at Los Angeles Air Force Base, the Protected Tactical Services Field Demonstration, or PTSFD, program represents a major improvement in anti-jam security via the Wideband Global Satellite Communications, or WGS, constellation and commercial satellites.

Eventually, hardware developed and tested under the PTSFD contract can be deployed as upgrades to existing satellite communication terminals. By reusing the antenna and RF front end of existing terminals, costs are greatly reduced, since those are the most expensive elements of any SATCOM terminal.

The new, protected SATCOM system will bring a distinct set of capabilities, including flexible access to commercial and government SATCOM channels for seamless transition between SATCOM systems to maximize communications availability for tactical forces.