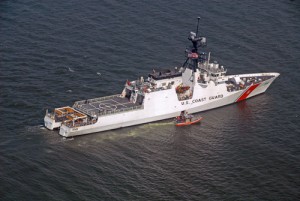 The U.S. Coast Guard awarded a firm fixed-price contract to Northrop Grumman Corporation for long-lead material procurement on a fifth National Security Cutter. The contract is for $89 million, with options that would increase potential value to $94 million. The Legend-Class cutters are the flagships of the Coast Guard fleet, designed to replace the 378‐ft Hamilton class High Endurance Cutters, which entered service during the 1960s.

“This award demonstrates the Coast Guard’s ongoing commitment to the National Security Cutter program and continued confidence in our shipbuilders,” said Bob Merchent, vice president, surface combatants and U.S. Coast Guard programs, Northrop Grumman Shipbuilding. “This procurement contract enables us to focus on effective and efficient supply chain management and move forward so we can secure the best price for equipment and materials, while also meeting our schedule commitments with our U.S. Coast Guard customer.”

The funds will be used to purchase long lead time materials and major equipment in support of the new ship, such as main propulsion and navigation systems, generators, electrical switchboards, major castings and the ship’s integrated control system. The work will be performed at the company’s Pascagoula facility.

Two of eight planned National Security Cutters have been commissioned and are executing Coast Guard missions. The third ship, Stratton, is over 75 percent complete and scheduled for delivery this year. A construction contract for the fourth ship was awarded on Nov. 29, 2010. Construction will begin on that ship mid-year 2011.

The Legend-class NSC is capable of meeting all maritime security mission needs. The cutter includes an aft launch and recovery area for two rigid hull inflatable boats, and a flight deck to accommodate a range of manned and unmanned rotary wing aircrafts. It is the largest and most technologically advanced class of cutter in the U.S. Coast Guard, with robust capabilities for maritime homeland security, law enforcement, marine safety, environmental protection and national defense missions. This class of cutters plays an important role enhancing the Coast Guard’s operational readiness, capacity, and effectiveness at a time when the demand for their services has never been greater.