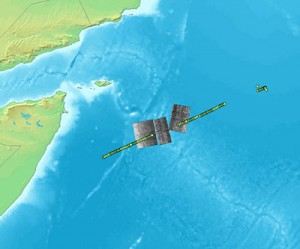 The Cosmo-SkyMed satellites, operated by the Italian space agency, have acquired the first images of the Italian oil tanker Savina Caylyn since it was hijacked earlier this week by Somali pirates in the Indian Ocean. According to the satellite radar images, acquired by Italian space agency (ASI) and e-GEOS on Wednesday afternoon and early Thursday morning, the seized ship is about 330 km off the Somalia coast.

The 266-m long and 46-m wide vessel was about 800 km west of India when it was attacked on Tuesday. There has been no reported communication with the vessel and no information regarding the 22 crewmembers on board.

The techniques to rapidly locate and track this ship in open waters were developed and are currently operated as part of the MARISS (Maritime Security Service) project funded under ESA’s GMES Service Element. MARISS provides pre-operational satellite-based maritime surveillance services for European waters, East Africa, the Caribbean and the Atlantic to support maritime law enforcement, anti-trafficking interventions and to protect shipping lanes.

Through rapid integration of satellite-based vessel detection with conventional information streams, it provides extended surveillance to a range of coast guards, police forces, navies, customs and excise agencies, border guards and intelligence services. The project is led by e-GEOS and has been running since early 2006.

The images and the extracted information on the vessel are fed directly by e-GEOS into the command and control system of the Italian Coast Guard who received the initial alert when the piracy attack occurred and are now maintaining contact with the vessel owners’ company security officer.

Dino Quattrociocchi, e-GEOS manager of the MARISS project, said: “This demonstrates our rapid response to such situations as well as our capability to track vessels far outside the coverage of conventional coastal surveillance systems. “Thanks to the fast update times between successive overpasses by the Cosmo-Skymed satellites, we were able to acquire imagery very soon after the initial request for information on the vessel.”

According to Dario Cau and Walter Conti, both working at the Italian Maritime Rescue Coordinate Centre Headquarters in Rome, “the satellite imagery represent a useful capability to track the vessel in open waters as well as providing important information on what is happening in the region around the hijacked vessel.”