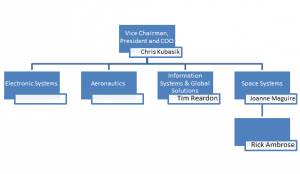 “Rick and Tim are exceptional leaders with diverse experiences and strategic leadership skills that will enhance our competitiveness and continue to drive value for our customers,” said Chris Kubasik, Lockheed Martin vice chairman, president and chief operating officer. “These appointments reflect the strength of our world-class talent development and deep bench strength.”

Ambrose brings 33 years’ experience in the aerospace and defense industry to his new role. He previously served as vice president and general manager of SSC’s Surveillance and Navigation Systems business and led Lockheed Martin’s Mission Systems and Sensors Tactical Systems business. Ambrose has a bachelor’s degree in electrical engineering from DeVry Institute of Technology, and a master’s degree in business administration from the University of Denver. He has also attended the Wharton Executive Development Program.

Reardon, who joined Lockheed Martin in 1998, was named vice president, operations for IS&GS-National in January 2011, and previously led the former IS&GS-Global and the IS&GS-Enterprise Integration Group businesses. Previously, he was a staff officer with the Central Intelligence Agency, focusing on national security issues. A graduate of the University of Virginia, Reardon earned a Bachelor of Arts degree in Economics and also holds a master’s degree in Systems Engineering from George Washington University.