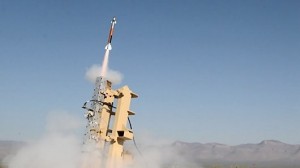 The U.S. Army is funding Lockheed Martin to develop hardware and software for the Extended Area Protection and Survivability (EAPS) program. Under this program, Lockheed Martin has conducted the first guided test flight of the Miniature Hit-to-Kill (MHTK) interceptor rocket. The MHTK is designed to defeat incoming rocket, artillery, and mortar fire out to ranges of 3 – 4 km (1.9 – 2.5 miles).
More soldiers are killed on the battlefield by mortars than by any other weapon of war. Accordingly, high priority is given to methods of defeating mortar fire. This is one of the purposes of the EAPS program, which is essentially a next-generation miniaturized version of the Israeli Iron Dome missile defense system. 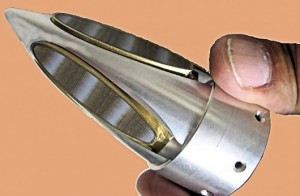 However, rather than removing incoming threats with explosive warheads, the EAPS system uses MHTK interceptors, somewhat like a low-altitude version of the U.S. National Ballistic Missile Defense System. These interceptors are very small and highly agile rockets, only 69 cm (27 in) in length, about 3.8 cm (1.5 in) in diameter (not counting the fins), and weighing about 2.3 kg (5 lb). The MHTK is powered by a Nammo Talley rocket engine.
The MHTK rockets contain a tungsten penetrator and a semi-active radar guidance system that guides the rockets to strike targets which are illuminated by a ground-based radar. While this goal may seem fantastic, it is worth remembering that semi-actively-guided .50 caliber bullets have been developed that home on a laser-illuminated target.
The EAPS test was held March 22 at White Sands Missile Range in New Mexico. The exercise was designed to test the MHTK interceptor in a realistic field scenario, where an enemy mortar is launched at an MHTK-protected area.
When a ground-based radar detects the mortar round, it’s tracked as it approaches the protected area. The mortar round is illuminated by a high frequency radar while one or more MHTK interceptors are launched vertically from a NLOS (Non-Line-Of-Sight) launcher on a trajectory from which the interceptor can detect the reflected illumination from the mortar round.
The MHTK interceptor being tested maneuvered to pass close by the target (this was not an interception test), and as it did so, it returned data to the fire control system. In addition to measuring the performance of the interceptor, which performed in accordance with expectations, this was the first time that the entire intercept system was tested as a unified whole. An intercept flight test is planned for later in 2013.