Analysis of the US FY18 Defense Budget 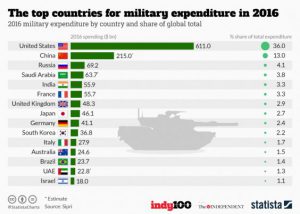 – The Fiscal Year 2018 defense budget cycle has been unusual in several ways. The budget request was submitted unusually late in the process, coming near the end of May, which makes it the latest a budget has been submitted to Congress. When it was released, DoD also announced that the request does not contain a projection for future years (the future years defense program or FYDP) that is normally submitted with a budget. The budget request additionally came during a year when the Department of Defense (DoD) and much of the rest of the government operated for more than seven months under a continuing resolution (CR), and to further complicate matters, the request exceeds the Budget Control Act (BCA) budget cap for defense by $54 billion. Several strategy reviews, including the Defense Strategy Review, the Nuclear Posture Review, and the Ballistic Missile Defense Review, were also getting underway while the FY 2018 budget was submitted. Each of these reviews could lead to significant changes in future DoD plans and budgets.

Given the somewhat unusual circumstances of the FY 2018 budget cycle, this year’s budget analysis takes a different approach. Instead of looking at the details of what the budget request funds or does not fund, it focuses on long-term trends in the defense budget and force structure and identifies key issues facing the Defense Department as it prepares for the FY 2019 budget cycle.