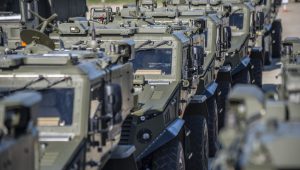 NATO has confirmed that it plans to establish a storage facility in Poland for U.S. military equipment, including armored vehicles, ammunition, and weapons to arm a full brigade.

A NATO official on March 23 told AFP that a report earlier by The Wall Street Journal that said the $260 million facility would be located in Powidz, some 200 kilometers west of Warsaw, was accurate.

The WSJ quoted NATO chief Jens Stoltenberg as saying work on the site will begin this summer and take two years to complete.

Since Russia’s annexation of Ukraine’s Crimean Peninsula in 2014, Poland, the Baltic states of Latvia, Lithuania, and Estonia as well as other Eastern European states have expressed concerns about their security.

The United States has deployed and rotated troops in the region since the Ukraine crisis began in an effort to deter Russia. NATO has also increased its presence near Russia’s borders.

Stoltenberg told the WSJ that the storage facility would help “underpin the increased U.S. presence in Poland.”

Poland has been calling for more U.S. military personnel to be deployed on its territory, with Warsaw suggesting to U.S. President Donald Trump recently that he create a permanent base under the name “Fort Trump.”

Secretary General Stoltenberg also said NATO will complete some 250 other infrastructure projects (Military Mobility Initiative) across Europe by 2021 which are designed to increase the capacity of airports, harbours, railways, and roads to handle heavy equipment. These are all part of NATO’s stepping up its defences in the face of increased Russian assertiveness, especially increasing defences along the eastern flank in response to Russia’s annexing of Crimea in 2014 and its role in the continuing conflict in Ukraine.

Since then, battlegroups have been deployed on a rotating basis in the three Baltic states and Poland and NATO has launched an overhaul of its command structure and is working to improve the speed at which it is able to move troops and equipment around Europe in case of incursion. This practice of pre-positioning equipment in strategic locations is also designed make it easier to deploy resources quickly in a crisis.

Based on reporting by The Wall Street Journal, AFP, Poland Daily and Clingendael Report