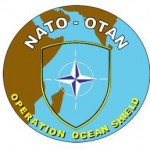 MV ANANGAL INNOVATION, a Greek-flagged ship, reported being approached by a small skiff while transiting eastbound in the Internationally Recommended Transit Corridor (IRTC) in the Gulf of Aden.

Commodore Christian Rune, Royal Danish Navy, Commander, Task Force 508, stated: “The helo and ship crews from JMSDF MURASAME and HNLMS DE ZEVEN PROVINCÏEN responded magnificently in disrupting another piracy attack in the IRTC. The cooperation between Japanese Maritime Self Defence Forces and NATO is proof of the commitment by the international community to establish a secure maritime environment in the Horn of Africa region”.
The helicopter from Japanese Maritime Self Defence Force (JMSDF) ship MURASAME quickly responded to the call from the merchant ship. As the JMSDF helicopter approached the skiff, the suspected pirates broke off the attack and the crew of the helicopter observed the suspected pirates throwing their weapons and other pirate related paraphernalia overboard.
NATO warship HNLMS DE ZEVEN PROVINCÏEN was dispatched by Commander, Task Force 508 to intercept skiff. After relieving the JMSDF helicopter following the skiff, a helicopter from the HNLMS DE ZEVEN PROVINCÏEN unsuccessfully attempted to stop the skiff.

The skiff refused to stop even after warning shots were fired from the helicopter. The skiff was finally stopped after warning shots were fired from DE ZEVEN PROVINCÏEN upon arriving on scene. A team from DE ZEVEN PROVINCÏEN boarded the skiff revealing that the suspected pirates had thrown, not only their weapons, but also ladders and other pirating materials overboard.