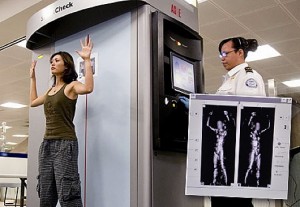 “We are always looking for new technology and procedures that will both enhance security while strengthening privacy protections,” Pistole said. “Testing this new software will help us confirm test results that indicate it can provide the same high level of security as current advanced imaging technology units while further enhancing the privacy protections already in place.”

By eliminating the passenger-specific image associated with the current version of AIT, a separate TSA officer will no longer be required to view the image in a remotely-located viewing room. Through removing this step of the process, AIT screening will become more efficient, expanding the throughput capability of the technology.

TSA worked with the Department of Homeland Security’s (DHS) Science & Technology Directorate (S&T) and private industry to develop the software, and began testing it at the TSA Systems Integration Facility in the fall of 2010.

AIT safely screens passengers without physical contact for both metallic and non-metallic threats, including weapons and explosives. Currently, there are nearly 500 imaging technology units at 78 airports nationwide, with additional units planned for deployment this year. The new software is being tested on millimeter wave AIT units currently in airports, with plans to test similar software on backscatter units in the future.

see other nexs on TSA Airport managment and passengers/cargo screening