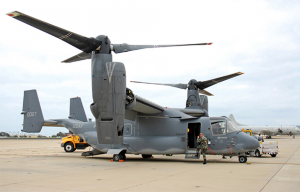 Bell Boeing, a strategic alliance between Bell Helicopter, a Textron company, and Boeing, was awarded a U.S. Navy contract today for five Bell Boeing V-22 Osprey tiltrotor aircraft to be delivered to Japan, marking the first sale of the aircraft through the U.S. government’s foreign military sales program.

“This is an important day for the Bell Boeing team in Japan and for the U.S.-Japan Alliance,” said Shelley Lavender, president of Boeing Military Aircraft. “The V-22 redefines what’s operationally possible for a country, and we’re looking forward to delivering this capability to Japan as we continue our enduring partnership there.”

“The Bell Boeing team is honored to have Japan as the first international customer for the V-22 tiltrotor,” said Mitch Snyder, executive vice president of Military Business for Bell Helicopter. “The distinct performance envelope of the V-22 will provide Japan with an ideal solution when the need arises. When assets are required on-target in a location without an airstrip, the self-deployable Osprey provides customers with an unrivaled combination of speed, range, and payload to execute a variety of missions.”