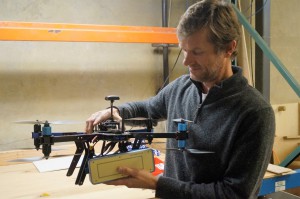 A new radar-equipped drone took off last month in Texas for a series of tests aimed at finding out how well Bellevue-based Echodyne’s miniaturized detect-and-avoid radar could spot obstacles and other aircrafts. The results confirmed that Echodyne is in the right direction. “It’s great to see our technology performing in real-world field tests exactly as designed,” Eben Frankenberg, Echodyne’s founder and CEO, said.

The Echodyne radars are little bigger than a cell phone and have a range of three kilometers, far superior to what they can do sophisticated Intel RealSense rooms fitted on high-end commercial drones. Although in truth the object of the first test has a more limited scope, 500 meters, but still much higher than a few meters of optical cameras. Besides the rooms can detect an obstacle close but can not give indications on the distance and possibly speed of a detected object, as do radar. The test specimen was mounted in a small drone and tested in Texas, confirming to Echodyne to be on the right track.

From that height, as seen in the video above, the radar is able to identify the trees and underlying fences, and also a second drone on a collision course.

The development of reliable radar size and cost compatible with small drones would be a significant step towards the opening of the heavens to the drones in autonomous flight, at the time impossible to do and therefore prohibited (the autonomous flight should not be confused with the automatic flight , so the use of features such as GPS routes, follow me or to return home, while those that are perfectly legal in Italy until the drone remains in de rider visual range).

Setting up a system that allows small drones to detect and avoid obstacles is one of the key steps that will have to be put in place before the Federal Aviation Administration gives the go-ahead for delivery drones to fly beyond their operators’ visual line of sight.

“This developer’s kit also works great for autonomous cars,” Frankenberg said, “and we have a number of people who are playing with it for exactly that use case. We also have some people who are interested in it for marine applications. So it’s definitely getting a lot of attention, because this is the first time anybody has brought high-performance, electronically scanning radar into the commercial market.”

In an interview at the company’s headquarters, Frankenberg told the radar units should become commercially available early next year at an initial price of $9,995 and “will come down into the low singles of thousands, according to sales”.