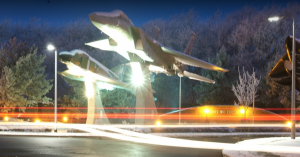 The MOD has awarded a contract worth £160m to Kier VolkerFitzpatrick to deliver infrastructure to ready RAF Lakenheath for two squadrons of US F-35s.

The Suffolk airbase will be the first permanent international site for US Air Force F-35s in Europe and continues the base’s long and proud history of supporting US Air Force capability in the UK.

The contract awarded to Kier VolkerFitzpatrick includes the construction of a flight simulator facility, a maintenance unit, new hangars and storage facilities.

The flight simulator will have the capacity to link to other simulators used pilots across the UK and beyond, allowing expertise to be shared and pilots from the UK and US to train together on a regular basis.

At the height of construction, it is expected that there will be up to 700 contractors on site. The investment will also provide wider benefits to the local economy with over 1,000 personnel and family members living at the base.

MOD is also working closely with Forest Heath District Council and Kier VolkerFitzpatrick to ensure that the opportunities to create employment and training are maximised to ensure they last beyond the end of construction.

A ceremony, attended by representatives from the Defence Infrastructure Organisation, US Air Forces in Europe and Air Forces Africa (USAFE- AFAFRICA), Air Force Civil Engineer Center (AFCEC), Kier VolkerFitzpatrick and Forest Heath District Council, was held at the base to celebrate the award of the contract.
Minister for Defence People and Veterans, Tobias Ellwood, said:

”For more than one hundred years now our armed forces have fought in defence of our common values and interests. Our two countries have developed the deepest, broadest and most advanced relationship of any two nations.”

”Today marks another step towards reinforcing the strong partnership between our two nations and an exciting milestone for RAF Lakenheath.”

”This investment will see substantial benefits to local economy, bringing 1,000 new personnel with their families and we will work hard to ensure that the benefits will last long after construction ends.”

”This is an exciting milestone for the 48th Fighter Wing and for all our partners. We’re transforming RAF Lakenheath together, and the work we do today is critical to the future security of the United States, the United Kingdom and the NATO Alliance.”

”We welcome this investment into RAF Lakenheath. This is an incredible opportunity for UK Defence and for the local area and DIO is pleased to be able to support the development of this key infrastructure which will make the beddown of the US F-35s possible.”

”We’re extremely proud to have been appointed to deliver another prestigious defence project for DIO. It builds on our extensive expertise in the defence sector delivering first-class projects within secure environments including facilities at MoD Lyneham and RAF Shawbury.”

”We look forward to working closely with the DIO and our local supply chain to provide this crucial infrastructure and deliver this exciting opportunity ready for the arrival of the two permanent squadrons.”

”We are delighted to have been awarded this highly significant project with DIO. VolkerFitzpatrick has been working with the United States Air Force at RAF Lakenheath for over ten years and we look forward to bringing the knowledge we have gained to this new contract.”

”The project will allow us to build on our substantial experience within the civil airports and defence sector, to deliver the highest quality infrastructure for the new F-35 Fighter Jet.”

The contract has been designed so that the enabling work can begin immediately on the award. Building work is programmed to start in the summer next year so that the base can welcome the first of the new aircraft in 2021.

The contract award is the first in a wider programme of work to support US Air Force operations in the UK, with more than US$1bn expected to be in invested in the UK over the next seven to ten years.