Eurofighter wants to sell 40 Eurofighter Typhoon 2020 jets to the Turkish Air Force, senior company officials said Thursday. “We are offering to Turkey the opportunity to jointly develop the Eurofighter 2020, the next version of the Eurofighter,” said Marco Valerio Bonelli, head of public relations and communications at Eurofighter. “It wouldn’t be parts production, but joint development.”
“We would like to provide two squadrons of Eurofighters to Turkey,” said Giorgio Zappa, director general of Finmeccanica whose subsidiary Alenia Aeronautica is one of the makers of the Eurofighter. Two Eurofighter squadrons consist of nearly 40 aircraft.

“Our cooperation [with Turkey] had been based mostly on industrial and commercial cooperation. Now we need to carry this cooperation to the strategic level, for 30 to 40 years,” said Guido Crosetto. “Today we are making together a helicopter, tomorrow we can move to another helicopter type, and then we can move to an aircraft,” Crosetto said.

“This matter will be one of the subjects I and [Turkish procurement chief] Murad Bayar will be talking about during my visit.”

Finmeccanica is the second largest industrial group and the largest hi-tech industrial group based in Italy. It works in the fields of defense, aerospace, security, transport and energy and is partly owned by the Italian government, which holds about 30 percent of Finmeccanica’s shares.
Finmeccanica’s subsidiaries in the defense field include Alenia Aeronautica, AgustaWestland and Telespazio, among others. AgustaWestland and Telespazio have already been awarded massive defense contracts in Turkey.
The Eurofighter consortium’s members include Alenia Aeronautica, Britain’s BaE Systems and the European EADS. The Eurofighter Typhoon is presently used by the air forces of Britain, Germany, Italy, Spain and Austria.
For its next-generation fighter requirements, Turkey has already chosen United States-led F-35 Joint Strike Fighter Lightning II. It plans to buy about 100 F-35s, worth about $15 billion.
However, Zappa said Turkey could accommodate both the F-35 and the Eurofighter Typhoon, as the two fighters have mostly different functions. The Eurofighter was designed mainly as an air-to-air fighter while the F-35 is more suitable for air-to-ground missions.
If Turkey decides to buy the Eurofighter, it could replace its fleet of older, U.S.-made air-to-air F-4Es with the new planes. “It mostly depends on our budget conditions,” one Turkish procurement official said about the chances of a Eurofighter buy. If Ankara chooses not to purchase the Eurofighter, it might buy an additional 20 F-35s, said a defense analyst.

In recent years Italy has become Ankara’s largest defense supplier, after the U.S. It has signed multibillion-dollar deals with AgustaWestland for the joint manufacture of 60 attack helicopters and a smaller contract with Telespazio for a military satellite.

In a related development, a top official from the European missile maker Eurosam announced that his company signed a framework agreement with the Turkish military electronics company Aselsam, the missile maker Roketsan and the systems integrator Ayesas forr cooperation in missile technology Thursday. “This agreement creates great work potential with the Turkish companies,” said Antonio Perfetti, Eurosam’s president.
Eurosam is competing with U.S., Russian and Chinese rivals in supplying Turkey’s multibillion-dollar long-range, high altitude anti-missile air defense systems program.
The framework agreement with the three Turkish companies details the work share of the Turkish firms in the Turkish program in the event Eurosam wins the Turkish missile contract.
The members of Eurosam include MBDA of France, MBDA of Italy and France’s Thales. Perfetti is also general manager of MBDA Italy. 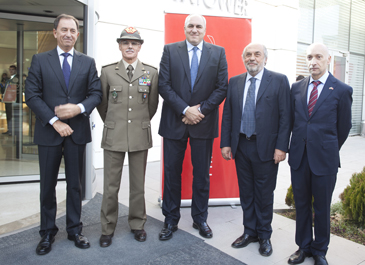