US Cyber Command Is Operational

U.S. Cyber Command, a subordinate unit of U.S. Strategic Command, is in its initial operating capability. The command is expected to be fully operational by October, according to Air Force Lt. Col. Rene White. 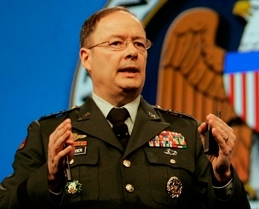 Army Gen. Keith Alexander, recently confirmed to lead the command, now officially steps into those shoes after receiving his fourth star Friday in a low-key ceremony at Fort Meade just prior to the command’s activation, the Pentagon said. Alexander will continue to direct the super-secret National Security Agency, which is co-located with Cyber Command at Fort Meade.
Defense Secretary Robert Gates directed the creation of Cyber Command in June 2009 in response to the already significant and growing digital threat from what the command identifies as “foreign actors, terrorists, criminal groups and individual hackers” posed to its information networks, which officials say are probed thousands of times daily. 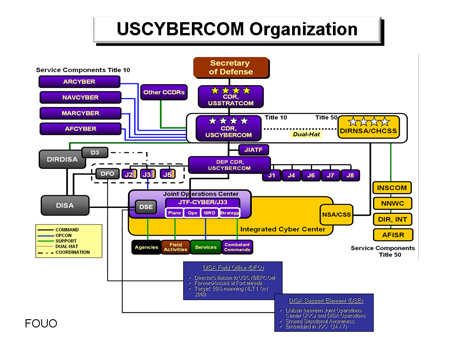 Cyber Command will “direct the operations and defense of specified Department of Defense information networks and prepare to, when directed, conduct full-spectrum military cyberspace operations in order to enable actions in all domains, ensure U.S./allied freedom of action in cyberspace and deny the same to our adversaries,” according to a fact sheet released Friday by the Pentagon.
Concerns were raised during Alexander’s Apr. 15 Senate Armed Services Committee confirmation hearing over whether Cyber Command’s operations will impinge upon efforts to protect civilian networks, which are the responsibility of the Department of Homeland Security. Alexander sought to tamp down those concerns.
“This command is not about efforts to militarize cyberspace,” Alexander said. “Rather, it is about safeguarding the integrity of our military’s critical information systems.”
Senators also questioned the close association Cyber Command and the NSA will enjoy, the degree of transparency the powerful tandem will display and the potential for infringement upon the civil liberties of everyday Americans. Alexander said there will be “significant synergy” between the two but that both will have distinct missions. He agreed that “transparency is important” and said, “We have to show what we’re doing to ensure that we comport, comply with the laws.
“NSA’s own mission and authorities will not change as a result of the creation of this command,” Alexander said. “And while cyberspace is a dynamic, rapidly evolving environment, what will never change will be an unwavering dedication by both Cyber Command and the National Security Agency to the protection of civil liberties and privacy of American citizens.”
“This is not an expansion of DoD’s mission,” the Pentagon added in a press release. “It is in keeping with the department’s mission to protect and defend U.S. national security and protect the lives of men and women in uniform.”
The Defense Department operates about 15,000 networks and currently has about 90,000 personnel dedicated to working on those networks, according to officials.